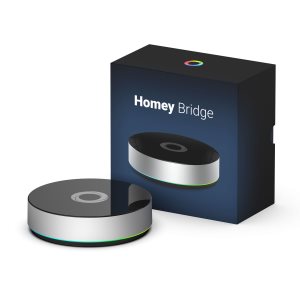 The Homey Bridge is the latest smart hub in the Homey family. It features Zigbee, Z-Wave Plus, Wi-Fi, Bluetooth, 433MHz and infrared, and it uses the loved Homey app for control and automation. Sounds like Homey Pro, but there’s some major differences. That starts with the design, which is completely different. It’s now glossy black, combined with aluminium. Of course, the signature RGD LEDring is still present, but it's more subtle. What makes Homey Bridge a real game-changer though, is its price: Homey Bridge retails with an MSRP of 69 EUR! That’s right, that’s less than one-fifth of Homey Pro.

The user experience for Homey Bridge and Pro are mostly similar. Most devices are supported by both products, and they share the same Homey app for control and automation.