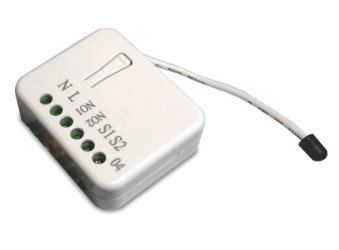 With the Philio Double Relay Insert, you can integrate existing electrical installations (e.g. lighting, airing systems) into a Z-Wave network. Thus, the connected devices can still be controlled with the existing wall switch, but – thanks to Z-Wave – also via remote control, smartphone or sensor-controlled automation. Thanks to its calibration technology the Philio relay module cannot only be used to switch AC devices ON and OFF, it also works perfectly with many kind of light, e.g. incandescent, fluorescent and LEDs. In addition to this, the module can also switch 12V/DC devices like 12V MR-16 lights.